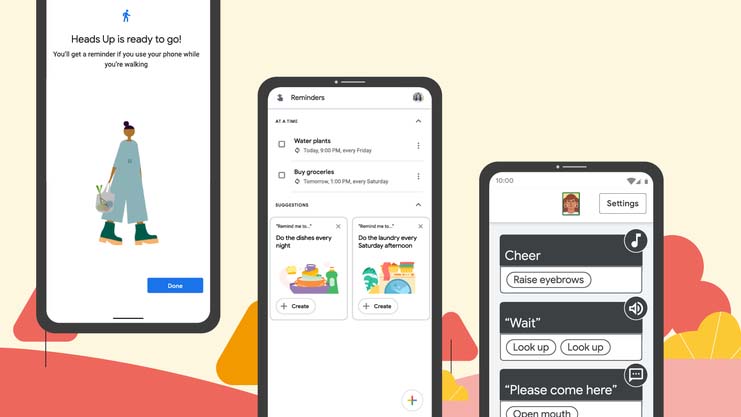 With the release of Android 12 looming large on the horizon, it’s a bit of a surprise to see Google announcing a host of new Android features coming soon that aren’t tied to the major OS update.

Google recently revealed on its blog that a collection of new features will be arriving on Android over the following weeks. That includes a number of formerly Pixel-exclusive features that will now be available to all (via Gizmodo).

This includes some recent additions like the new Locked Folder feature in Google Photos that allows you to create a private password-protected folder within your Google Photos library. Given the heightened attention to digital privacy in recent years, that’s an overdue and welcome feature for everyone.

For your actual physical safety, Heads Up will alert you if you are walking and looking at your phone. I’ve found this feature to be hit or miss and many are probably going to go ahead and pass on it, but it would certainly be a good feature to set on a child’s phone to make sure they aren’t distracted while walking.

Nearby Share is Android’s answer to AirDrop, allowing you to share files with nearby devices. The new update will give you more granular control over who can see your device and send files to you. You can opt to allow anyone to send you things (probably don’t do that), allow contacts to send you things or block the feature entirely.

Gboard is also getting an update for those that opt to use Google’s keyboard. For those that don’t always rely on words for their messaging, Gboard is adding over 1,500 new stickers and new emojis via Emoji Kitchen.

On a more utilitarian front, if you copy multiple phone numbers, email addresses or URLs it will automatically parse them for you and allow you to paste them individually. Screenshot sharing is getting smarter, if you open a messaging app after capturing a screenshot it will automatically show it as a suggested item to share. If you are running Android 11, you will also now have the option to swipe across the spacebar to accept a Smart Compose suggestion.

Reminders is getting a nice update with Google Assistant. When you say “Hey Google, open my reminders” it will now show you your existing reminders and some potential suggestions.

If you use a Google TV or Android TV OS device, you can control it easier from your phone either using the Google TV app or by adding a new remote tile to your Quick Settings. This is particularly handy when you need to enter a password.

Android is also introducing a handful of new accessibility features. Camera Switches can be turned on in the Android Accessibility Suite and it allows you to navigate your phone using facial expressions. Project Activate similarly allows you to use facial gestures and eye movements in order to trigger specific actions on your phone. For low-vision or blind Android users, a new update Lookout will allow it to read handwritten or printed text for any Latin-based languages.

These features should all be coming to Android devices over the next several weeks. While we’re certainly excited to see Android 12 arrive, this is a great example of Android updates not being all about the major OS releases.

iOS 15 tips: How to move the address bar back to the top of the Safari browser