Acer is continuously improving its Predator Helios 300 line, with the third generation of this metal-clad gaming laptop dropping last summer. After nearly a year of testing Acer’s latest Predator improvement in various environments — from gaming to professional — here’s what we’ve come up with. 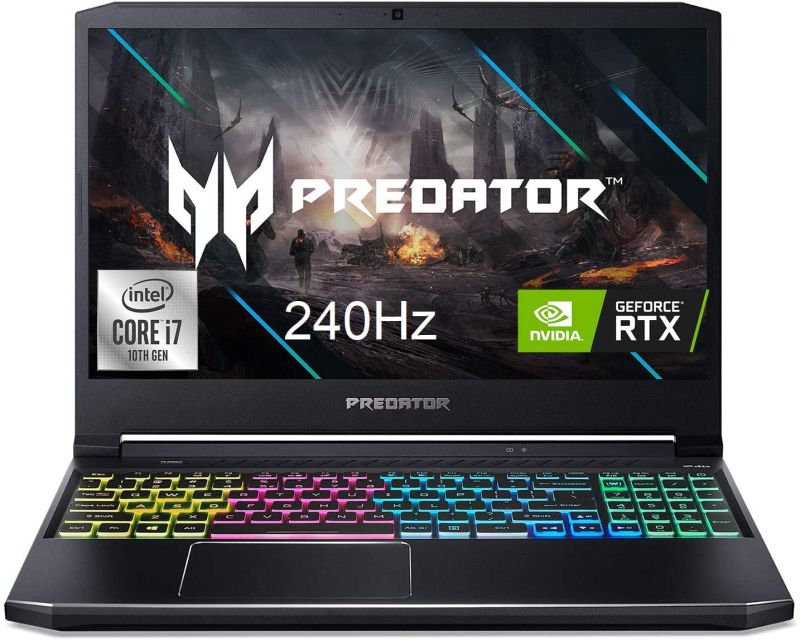 For gamers or those who need a little extra power, Acer’s handy “Turbo” direct overclocking button is a nice touch. But what happens when you press it?

Almost instantly, you’ll hear the system’s dual fans kick on as a total of 59 blades blast your system with air. While some reviewers have described this sound as ‘like a jet engine starting up,’ we’ve found that the fan noise is a very minor distraction and can easily be tuned out similar to other gaming notebooks in the mid-range class. But how does this affect performance?

According to the 3DMark’s “Fire Strike” benchmark test, overclocking (or pressing the turbo button) does make a difference. Acer’s 2020 Predator 300’s score increased from 17,035 to 17,527 points when overclocked. The 3 percent increase in power is noticeable, but you probably won’t notice an incredible difference unless you’re playing a game that really pushes your system to the limit.

3DMark is a popular benchmarking app used to test gaming PCs and laptops. Fire Strike is the DirectX 11 benchmark test for gaming PCs, which uses a physics test and a combination stress test that stresses both CPU and GPU. This test is used for gaming PCs at 1920 x 1080 resolution.

For reference, a good 3DMark score for gaming is between 1,500 and 5,000. Anything over 6,500 points is considered “elite” status. It goes without saying the 2020 Predator gaming laptop is pushing the industry standard to the next level — especially at a mid-range price point.

Not just for gaming

While the above specs will have gamers ready to order a 2020 Predator Helios 300, this beast wasn’t built just for gamers. The IPS display has a refresh rate of between 144Hz and 240Hz depending on which model you select. Combined with a 1920 x 1080 resolution and 3-millisecond response rate, you’ll notice the difference even when accomplishing simpler tasks like browsing websites, video chat, writing and spreadsheets, and photo/video editing.

A difference in specs

While most reviewers get the most expensive model in order to do their benchmark tests, the main difference you’ll find between the cheapest and most expensive Acer Predator Helios 2020 configurations comes down to the GPU and refresh rates.

If it isn’t vitally important to have a 240Hz refresh rate with an 8GB GeForce RTX 2070 GPU, you’ll likely be equally impressed with the lower-priced configuration which has a 144Hz and a 6GB GeForce RTX 2060 GPU. After all, both share Intel’s six-core, 12-thread Core i7-10750H processor, 16GB of memory, and a 512GB SSD with Windows 10 Home edition.

With dozens of configuration options, you’re almost certain to find exactly what you need at your mid-ranged price point.

In the mid-range market segment, competition is steep. However, at similar price points to Acer’s highest-end Predator Helios 300 configuration — it could be hard to justify picking any other brand/model. For example, Dell’s G5 15 doesn’t offer anything over 144Hz at a similar price to the Predator Helios 300’s 240Hz configuration option. Similarly, Lenovo’s Legion 5i only goes up to 144Hz with a 6GB GeForce RTX 2060 GPU. Although Asus ROG Zephyrus M15 has double the solid-state storage (1 TB) and a 240Hz refresh rate, the drawback of single-zone keyboard backlighting and no webcam could be a dealbreaker for some.

Get A Rental Quote

Packing all of the power into a portable gaming machine doesn’t come without its drawbacks, but perhaps most of them are to be expected.

First off, perhaps the worst quality, and most expected drawback, is the Acer Predator Helios 300’s battery life. While you could extend the life to 9 to 10 hours by dialing back the settings a bit, you’re likely to  get only 7 or 8 hours on normal settings. It goes without saying that pressing the “turbo” button and pushing your gaming laptop to the limits will have a drastic effect on battery life. In fact, the Helios 300 only lasted around 3.25 hours on the Laptop Mag Battery Test, which involves continuous web surfing at 150 nits of brightness. On top of that, you can only change the performance mode if your Helios is at least 40% charged and plugged into an outlet.

While users (and gamers) who always have their Predator Helios 300 on a desktop, or propped up on something, the heat may never be an issue. However, after just 15 minutes of playing fullscreen HD video, the undercarriage of this gaming laptop reaches up to 96 degrees. After 30 minutes of gaming, the same PC reached 120 degrees Fahrenheit, not on the undercarriage, but at the center of the keyboard. While this may not be an issue for the average desktop user, for those looking to do resource-intensive tasks on the go, this could be a dealbreaker.

But the thing is, the heat and battery life should almost be expected for all gaming-grade laptops at the mid-range price point — and most of them don’t offer specs quite as good as Acer’s Predator Helios 300 (2020).

Acer continues to push the mid-range industry standard to the next level with its 2020 Predator Helios 300. Equipped with a metal chassis in the face of mostly plastic competition, the Helios 300 looks to impress immediately after unboxing the device. On top of that, you can choose between a 15.6-inch 144Hz or 250Hz display, OR a 17.3-inch 144Hz display. The smaller displays both run the notable GeForce RTX 3060, while the larger display runs RTX 2070 Max-Q.

With one-button overlocking and support for three storage drives, you might forget that it doesn’t have class-leading battery life. In fact, PCMag came to the same conclusion when it awarded this 2020 model its Editors’ Choice Award.

Do you need a powerful portable notebook on a temporary basis? You’re in luck, the 2020 edition of Acer’s Predator Helios 300 has been added to our gaming laptop inventory. Perfect for gaming events, eSports tournaments, software development, and more — our gaming laptops are available to rent daily, weekly, or monthly.

Since 1989, Rentacomputer.com has been striving in the evolving technology and event management fields, providing an unmatched level of service and technical support.